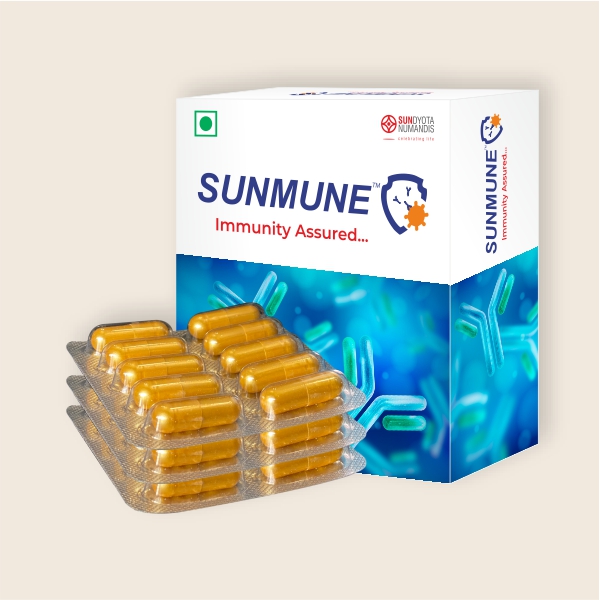 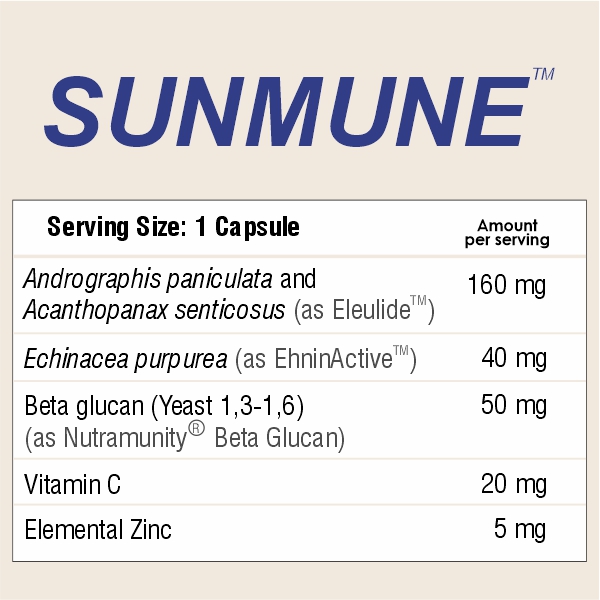 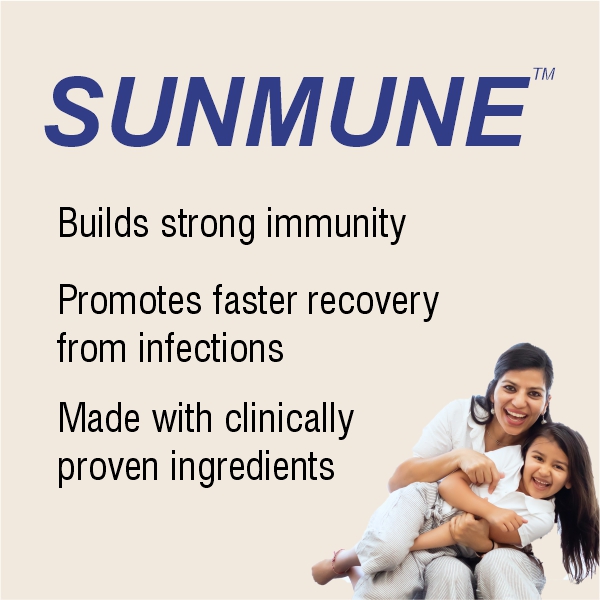 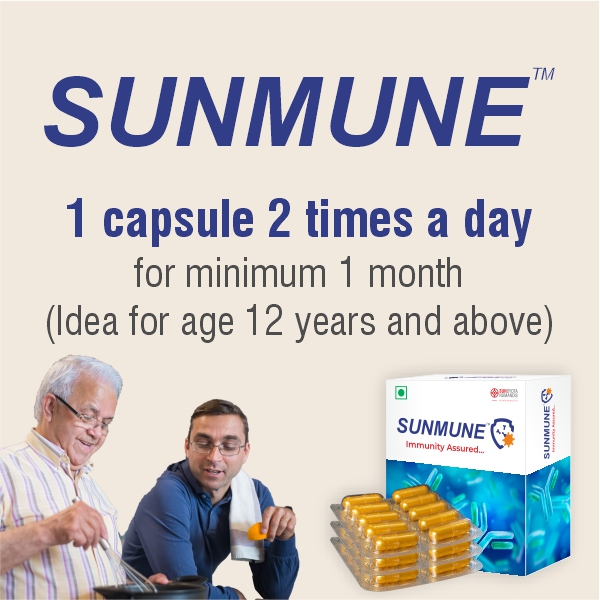 Sunmune™ is an evidence based nutraceutical product for prevention and management of respiratory infections; and for strengthening immunity in adults. Sunmune™ contains a proprietary blend of clinically proven ingredients; that are finalized through extensive scientific research

A. paniculata: By increasing production of antibodies and lymphocytes

A. paniculata: By inhibiting binding of virus to the host cells

A. paniculata: By direct bacteriostatic and bactericidal effects.

E. senticosus: By reducing expression of inflammatory proteins and by inhibiting NF-k?

Acts at Peyer’s Patches to stimulate different types of WBCs

Hypersensitivity to any of the ingredient present in the formulation. Pregnant or lactating women should not consume. People who have a compromised kidney or liver function, patients who have HIV or cancer should avoid taking Sunmune™

1. How would one know that his / her immunity has increased?
An increase in immunity may be correlated with reduced frequency of infections and lesser severity of symptoms. It also means faster recovery from illness and reduction in post illness fatigue. Overall a person may have an enhanced feeling of wellbeing.
2. Can Sunmune™ be taken along with other supplements or medications?
Yes. Sunmune™ may be taken along with other supplements and medications. However, if taking Sunmune™, one may not need any other supplements for increasing immunity, unless specifically advised by a healthcare professional. Other routine medications for other conditions may be continued as usual.
3. By when can one expect to see results with Sunmune™?
If Sunmune™ is taken for viral infections, with symptoms like cough, cold, fever, or sore throat; results may be seen in 3 – 5 days. However, for strengthening immunity, Sunmune™ must be taken continuously for at least one month.
4. What if a dose of Sunmune™ is missed?
For optimal results with Sunmune™; it is recommended that it should be taken regularly, without missing any doses. This is required because strengthening immunity takes time and requires regular effect of the ingredients on the body. If one is otherwise regular, one missed dose will not impact the results. However, if doses are missed frequently, the desired results may not be achieved. In any case, multiple capsules should not be taken together to make up for the missed dose(s).
5. Can Sunmune™ be taken by pregnant / lactating women?
Sunmune™ capsules should be avoided by pregnant / lactating women.
6. Should Sunmune™ be taken before or after meals?
Food does not have any effect on the results of Sunmune™. Hence, it may be taken regardless of meals
7. For how long should Sunmune™ be taken?
Sunmune™ should be taken for at least one month. Based on clinical data, Sunmune™ may be taken for three months continuously.
8. For what age-group should Sunmune™ be given?
Sunmune™ capsules may be taken by anyone aged 12 years and above.
9. Are there any special precautions while taking Sunmune™?
Sunmune™ should not be taken by people who have a compromised kidney or liver function, patients who have HIV or cancer; or women who are pregnant or lactating. Also, people with hypersensitivity to any of the ingredients of Sunmune™ capsules must not take it.