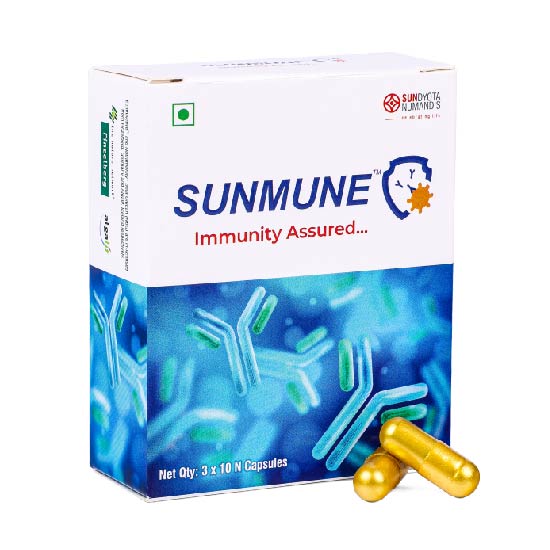 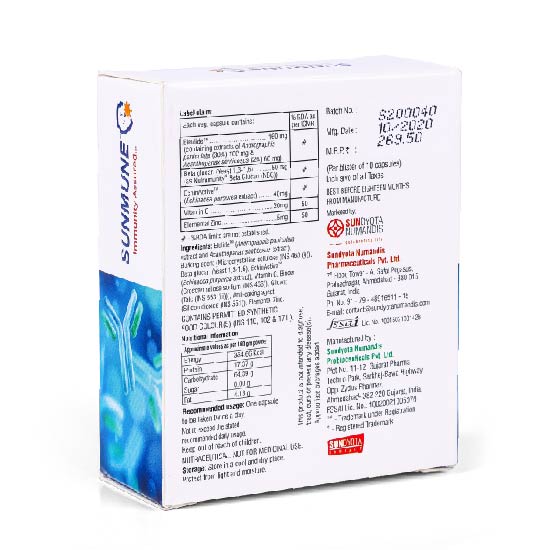 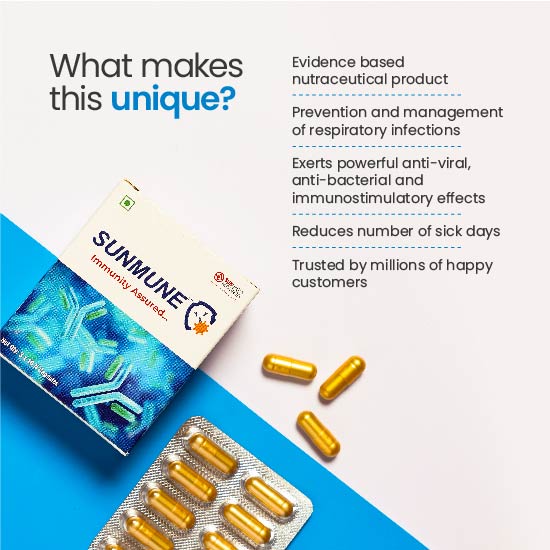 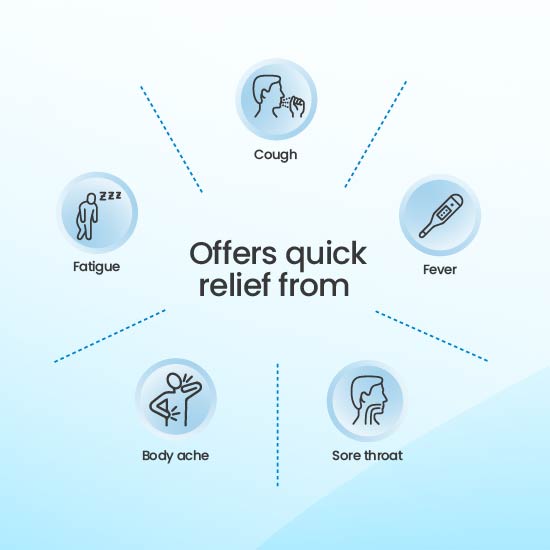 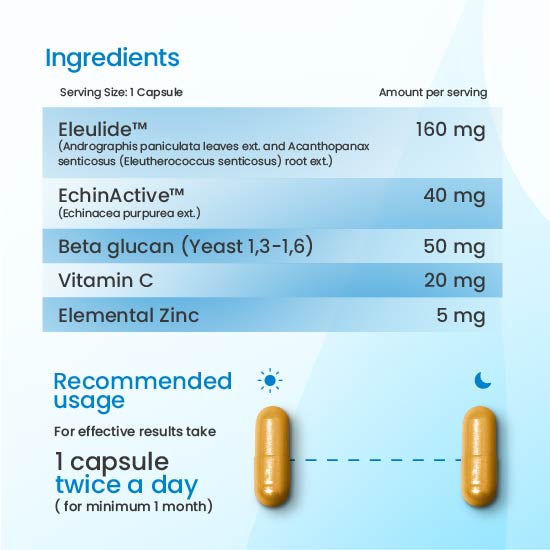 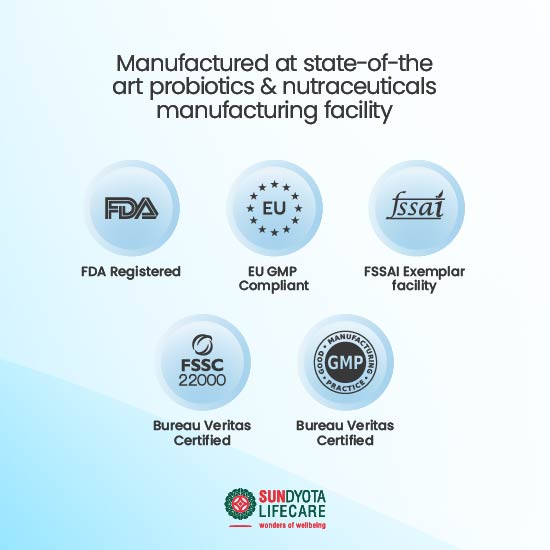 Inclusive of all taxes

1. Acts at Peyer’s Patches to stimulate different types of WBCs

1 capsule twice a day, for 1 month

1. How would one know that his / her immunity has increased?
An increase in immunity may be correlated with a reduced frequency of infections and lesser severity of symptoms. It also means faster recovery from illness and a reduction in post-illness fatigue. Overall a person may have an enhanced feeling of well-being.
2. Can Sunmune™ be taken along with other supplements or medications?
Yes. Sunmune™ may be taken along with other supplements and medications. However, one may not need any other supplements for increasing immunity if one is taking Sunmune™ unless specifically advised by a healthcare professional. Other routine medications for other conditions may be continued as usual.
3. By when can one expect to see results with Sunmune™?
If Sunmune™ is taken for viral infections, with symptoms like cough, cold, fever, or sore throat; results may be seen in 3 – 5 days. However, for strengthening immunity, Sunmune™ must be taken continuously for at least one month.
4. What if a dose of Sunmune™ is missed?
For optimal results with Sunmune™; it is recommended that it should be taken regularly, without missing any doses. This is required because strengthening immunity takes time and requires the regular effect of the ingredients on the body. If one is otherwise regular, one missed dose will not impact the results. However, if doses are missed frequently, the desired results may not be achieved. In any case, multiple capsules should not be taken together to make up for the missed dose(s).
5. Can Sunmune™ be taken by pregnant/lactating women?
Sunmune™ capsules should be avoided by pregnant/lactating women.
6. Should Sunmune™ be taken before or after meals?
Food does not have any effect on the results of Sunmune™. Hence, it may be taken regardless of meals
7. For how long should Sunmune™ be taken?
Sunmune™ should be taken for at least one month. Based on clinical data, Sunmune™ may be taken for three months continuously.
8. For what age group should Sunmune™ be given?
Sunmune™ capsules may be taken by anyone aged 12 years and above.
9. Are there any special precautions while taking Sunmune™?
Sunmune™ should not be taken by people who have a compromised kidney or liver function, patients who have HIV or cancer; or women who are pregnant or lactating. Also, people with hypersensitivity to any of the ingredients of Sunmune™ capsules must not take it.
Srinivas Reddy I really like to take out time and tell you that this product is here to solve all your worries. It totally works for health and gives impressive results. I have been taking this for 4 months now and i don’t think I’ll ever switch to any other immunity supplement. i am glad i dont have to drink the kadha anymore and 1 capsule a day can do that job quite easily. Jayshree Mane in this pandemic, i got corona and i was terrified of it and just wanted my immunity to be stronger. my mom suggested this to me and now i live worry free Rajeev Ranjan My whole family takes Sunmune and we all are very satisfied with the results, in these times it is important to keep the body protected from viruses and sunmune is here to take care of that… Throughout the entire year, i did not fell sick, i felt my body stays energized, the ingredients are very impressive, my tonsils stayed away from me and we literally felt this is a must-have supplement in every household. Gauri Shankar Between all the products that caught attention due to the pandemic, I m happy that i came across sunmune. I live with my parents and i have to go everyday to my job.. Bringing home viruses from outside is the last thing I would want.. Sunmune boosts my immunity and is a part of my routine now Vrinda Jadwani This is a trustworthy capsule that can be taken every day & this capsule has no side effects.. They’ve put every ingredient in the medicine very thoughtfully and their research is impressive, i would totally endorse Sunmune VIKRANT BHOLA This product is simply amazing for relief from sore throat, cough and fever. I ordered this as I was not feeling well and had a feverish feeling with a sore throat. In just a single day (2 doses of capsules) I started feeling much much better... (but i'll still continue for about a week). It works like magic. It's even good if you start taking it at the slightest sign of a respiratory infection. It is very effective in even preventing the infection to progress. I wish I could give a rating higher than 5 out of 5. Rasik Thanki It's an excellent product. I had used this during 2nd wave of Covid with some excellent benefits. As the 3rd wave was around the corner, I reordered it for my entire family, and as promised by the product, noone in the house was affected during this time. Its really great product for cold, flu and seasonal infections.